I adore sharing dinner with friends.

Last weekend, my housemate Courtney’s best friend was visiting from Sydney and they were off to the Yarra Valley for some of the wonderful things in life.Cheese, chocolate and wine. As they prepared themselves for a day of boyfriend-who-can-provide-them-with-lifetime-of-cheese-and-chocolate searching (okay they didn’t say that, but six months of living with Courtney has me thinking otherwise), I laid on the floor vulnerable and feeling sorry for myself. I blame the pork belly bites and mindblowingly good dipping sauce served at the previous nights bar opening.

Courtney promised to bring back cheese, if in return I prepared dinner. Hardly a fair trade but you can’t blame the girl for trying.  Early on in our housemateship, it only took the words ‘I wouldn’t mind a batch of cookies right now’ to be spoken late one Monday night and forty-five minutes later the smell of triple chocolate cookies was wafting through the house. So really, I shot myself in the foot right there.

But I do it because I love it, and I get real satisfaction providing my family and friends with delicious food. I adore being in the kitchen (even if it is covered in horrendous green tiles) and was honestly thrilled at the chance for us to share a home cooked dinner together and sit at the table. For the first time ever.

It’s a great pie, and I’ve made it three times now.

The first time I ever made it I actually followed the recipe. I made three individual open pies, and put the remaining filling in some ramekins, and topped it with my best (and only) attempt at lattice work.

I’m not going to lie, the lack of greenery made me feel uneasy, and it was a little too much pastry for my liking. But with a tiny leaf of spinach (in place of the parsley I forgot to pick up at the shops), these pies were perfectly instagrammable.

And perfectly delicious. Oh, how my heart sung when dad approved of this lentil-filled pie.

The second time I made this pie was at the request of my mother for her birthday. I had already made lemon cupcakes with lemony cream cheese frosting (yes, do try that), so I put my dietitian hat on and used filo pastry instead. Well, I’m really glad my parents had already experienced the explosion of flavour because the way the pie exploded on the plate was not aesthetically pleasing at all.

This time though, I demonstrated my ability to negotiate. I used short crust pastry (let’s face it, it tastes better) and made one big pie. The student dietitian within me had me standing at the freezer section for longer than necessary. Low price & full fat, or higher price & reduced fat. I think we both know who won.

Everything went smoothly and I successfully lined my red and white pie dish for the first time ever. Using a pie dish for a pie, who would have thought?

But there was a slight malfunction with the cooking time. I demonstrated poor planning skills (clearly I have been spending too much time writing job applications) and did not even consider the extra time in the oven needed.

Nevertheless, the Moroccan aroma teased the hungry women patiently waiting in the lounge, and the pie eventually surfaced from the oven forty-five minutes later than planned. I served it with a side of French beans on mismatched white dinner plates, using my late grandmothers serving cutlery. 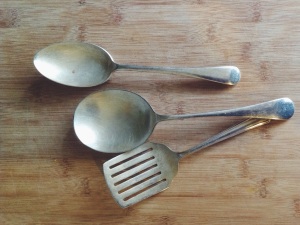 Mary grabbed my beautiful pineapple, tangerine and cherry scented Glasshouse candle from my room, and Courtney came with a bottle of red. The four of us stood around our beautifully set table, admiring the odd combination of flowers I had put in a mason jar, and as a true sign of the times, filled our iPhone with photos. I cursed the horrible lighting, and stood on a chair to try and capture the classic above-table shot. 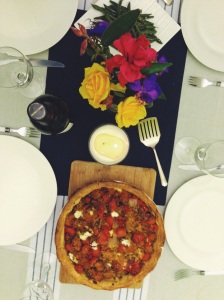 I wonder if people actually eat food hot these days, because those beans definitely needed reheating.

We finally sat down. I cut the pie, and we passed around the beans. There was silence, and I held my breath. The crust was a little crunchy, but the pumpkin-lentil-ricotta filling, moist and delicious. We drank Jacobs Creek Reserve Shiraz and laughed at my success of locating flowers in our garden. 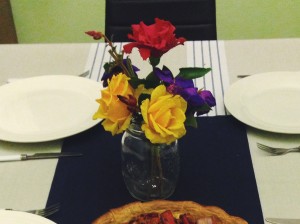 We taught Courtney about Instagram and the purpose of hashtags.We discussed celebrity chefs, seasonal cooking and the influence of television cooking programs. We laughed, we spilt wine and we spoke of the girl’s upcoming trip to London and Paris. And we all expressed dread for the day that cooking may become a chore.

The television wasn’t on, and our phones weren’t to be seen.

It was just the four of us, our conversations and my empty red & white pie dish. 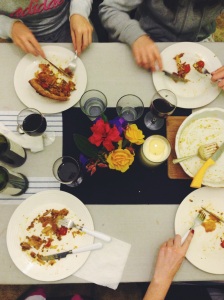 And, it was lovely.

One thought on “Sunday dinner.”