There is something about the atmosphere, the people and the wafts of cinnamon donuts that is just so inviting.

I love wandering around the stalls, speaking to the stallholders and tasting what they have to offer. And my mother has a $10 jar of rhubarb & rose geranium jam as a result.

Over summer I experienced London’s Borough Market (a must do for all foodies), drank mulled wine at the Christmas Markets in Paris & London, ate very nice strawberries from the market in Nice, France (see what I did there?), and enjoyed many foods on offer at Melbourne’s Night Noodle Market & Queen Victoria Night Market.

But it has been a while.

Waking up to a photo of friends experiencing the Borough Market in London had me longing for cheese tasting and the aroma of roasted chestnuts. So as I sat drinking my instant coffee (previously mentioned friend moved out and took Nespresso machine) on a rainy Sunday morning with nothing urgent to do, I decided to tick off another Melbourne foodie hotspot.

Forty minutes later, I was wandering the aisles and smelling the aroma of Simply Spanish’s paella cooking on Cecil Street. I admired the fresh bunches of baby carrots and beetroot  and made a mental note to check out the $1 bag of vegetables on my way out.

As I got lost, market-goers were enjoying freshly shucked oysters and purchasing fresh sourdough. Some were simply enjoying some people watching, with a coffee and peanut butter & jelly donut from Clement coffee. Oh, how they looked divine.

But then I found Mecca. A nut lovers Mecca.

I was instantly drawn in by the mound of pomegranate and pistachio turkish delight sitting on the counter, and the large display of fruit & nut mixes. 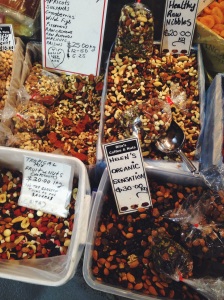 I wandered around the store mentally note-taking present ideas and laughing a little at the activated organic almonds. 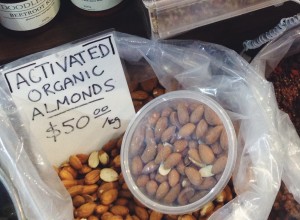 There were homemade italian biscuits on the counter, and a mound of pistachio & almond halva waiting to be devoured.

Dried fruits, nuts and muesli mixes. Coffee and tea by the scoop. Fresh Licorice and chocolate-coated freeze dried strawberries. Bottles of sauces and jars of nut butters, and bags of lentils and grains.

There really was something for everyone.

I even got to meet Rita.

That’s the thing about markets. Stallholders actually run their stalls. And they do it with so much passion too. 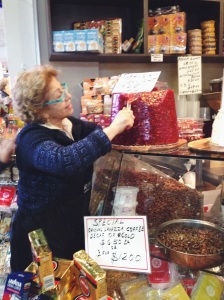 Rita sliced chunks of turkish delight and nougat for myself and other shoppers. They were a winner, as was Rita. She was hilarious, looked after her customers and had me coming back. That is, after I found an ATM. Word of advice: take cash.

I returned, spent more money than I intended, and left with some chai tea and a small bag of Helen’s Organic Sensation fruit & nut mix. (Those chocolate and nut mixes get me every time.)

Before I left the market, I had one more thing to do. For I didn’t think my south-melbourne-market-acquainted friends would approve if I left without trying the famous South Melbourne Market Dim Sims. 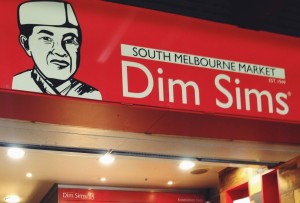 It was okay though. My market adventures had left me feeling a little peckish.

So I had a fried dim sim. I believe if you do it, you should do it properly. Although, they do sell them steamed as well.

It was good. Very good.

You should try one too.

After all, it is Wednesday and the market is open.

But if spontaneous mid-week market trips  don’t work for you, spice up your hump day with my market inspired chai-infused apple ‘dim sims’.

I think they are delicious.

Place tea in tea infuser (a tea bag will also work) & allow to brew for ~5 minutes.

Core & dice the apples, leaving the skin on for extra fibre.

Place apples, tea, sultanas, cinnamon & maple syrup (I liked this addition, omit/change if you like ) in saucepan, and simmer until apples are tender & liquid is reduced.

Remove from heat & allow to cool.

Using a basting brush, brush each piece of pastry with melted butter.

Fold in each corner of the pastry; ensuring to brush each time.

Bake for 15-20 minutes until golden brown. 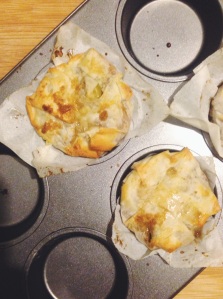 Enjoy with a dollop of yoghurt.

Although, vanilla ice cream would go alright too.

Flashback to two years (weeks) ago to these smiling faces, when life felt calm + certain. What an emotional year this week has been for the part of our life that is @littlekoicafe. @instagills has decided to start selling coffees at 6am + we’ll wait to hear the official news about when the coffee machine must be turned off. Now let’s ALL do our best to stay home, wash our hands properly + kick this virus and 2020 in the but 👊🏼👊🏼👊🏼 P.s. make up by @abbeysedwards 🙌🏼
I’m finding the supermarket a really sad place. Everytime I go, I feel sad, uneasy, angry, distressed. Not because I can’t buy a packet of gingernuts or have broccoli for tea. We are okay. It’s because we, a country that all come together instantly to support our fire affected communities, is now not helping each other. The panic buying is implicating our vulnerable community, in a country where we do not have a food security issue. Some people live paycheck to paycheck, and can’t afford to buy in bulk. Some people live paycheck to paycheck and can’t afford to buy the most expensive bread that’s left of the shelf. Some people can only manage to go shopping once per fortnight, and need to be able to buy more than one packet of mince. I could keep going. The greed and panic we are seeing here in Australia is affecting far too many people. If you use 2L milk per week, buy 4L. Not 4 cartons. Please, just buy what you need. And it is absolutely normal to feel anxious or sad in this coronavirus situation, and to be honest we really can’t get away from it. But please let’s not let it consume us. We still have so much to be grateful for, and many things that can bring us joy during this time. Yesterday I bought these Portland Strawberries, and they were the best bloody Portland strawberries I’ve eaten in a while. So bloody good I talked about them in my office, at work, at my Pilates class. I’ve also started watching @thecrownnetflix and I’m finding myself so fascinated by the Royal Family. I like to make cakes, and the beauty I shared yesterday makes me smile. How good are sprinkles? There is something therapeutic about going all anal retentive on icing and then covering it with sprinkles. I also love puppies. What brings you joy?
Life is better with sprinkles. ✨🌈
👩🏻‍🤝‍👨🏼 @instagills
Home from such a wonderful catch up with these ladies 💖 We didn’t manage a photo so here is a flashback to this magical day. #heartisfull
29 + feeling fine. 💃🏼 Great long weekend in NTL + SYD with my main man. ✈️☀️🥟🛍🍦🏀🥂
Love your guts @nicolesm16. I miss overeating with you 💗
Elton John: “It’s fucking hot”.☀️ It was GREAT whilst it lasted 🌊
Layers and layers of mud. 💐 So excited to meet the little girl we celebrated yesterday ✨